So, it’s been almost three weeks, and I realized that I was getting lazy.  So no more procrastinating, or maybe I’ll just do that tomorrow.

Just after my last post, I headed to lovely Wilmington, NC for a conference for work.  “There’s a Wilmington in NC?” You may be wondering?  And if you are, then you obviously never watched Dawson’s Creek.  Um, well, not that I did either, I swear.  It is on the convergence of the Atlantic and the Cape Fear River.  Charming.  The conference was at the Wilmington Convention Center, which was fairly new, and quite nice, however, the area of downtown around it could use . . . . . a little revitalization.  I’m not saying it was dangerous, but to walk to dinner I had mace, a broadsword, nun-chucks, a bowie knife, a chained mace, a badger and finger cymbals in my coat (well, how do you you control a badger??).  It was a big coat (Steve would say all my coats are big).

When I got back, I had my first bout with illness here in NC.  I’m surprised that it took as long as it did, as moving usually brings that on pretty quickly.  I didn’t realize at first that it was illness, I thought it was an asthma attack (which I was diagnosed with two years ago.  Because your thirties is the perfect time to develop asthma).  I had no symptoms of a cold or flu, I just had a cough and shortness of breath.  Alex was concerned that because of the 6 hour drive to Wilmington (and if you know St. Clair’s, you know that we DO NOT STOP on the road) it might be a blood clot, and so off to urgent care we went.  And while taking blood, the nurse was having a hard time getting a vein (they usually do), and somehow triggered a vaso vagal response, and boom!  Passed out!  However I now know the secret to great service.  Anyway, they made sure there were no clots and no blood oddities, doped me up with steroids and hydrocodone (perfect time to start lifting weights!  Build muscle, no pain!) and sent me home.  Luckily it didn’t get much worse and by the end of the weekend I was starting to get back to normal.  How did I celebrate such a turn of luck, you may be wondering?  I gave it to Alex!  You’re welcome, honey!

In the midst of illness (or maybe a contributor to the illness), our heat went out.  So I had mentioned getting a fuel oil refill in an earlier post.  The fuel oil heats water, and the hot water is pushed through the baseboards.  Voila, heat.  Except not.  And not being familiar with how these things are supposed to work, we initially assumed that maybe it’s just not a very efficient system.  Or we’re desert wimps and our blood just needs to thicken up.  But on about our third day of the ground floor not getting above 55, we said, this can’t be normal.  We let the owners know, and they got in touch with someone to come over and take a look.  They said they’d be over the next morning, the Wednesday before Thanksgiving. 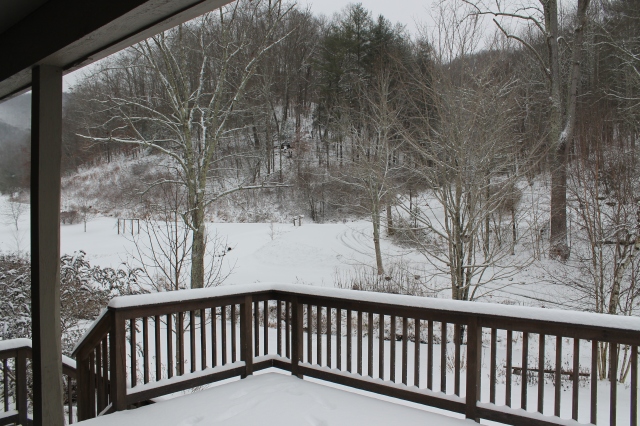 Because what does everyone want when you have no heat, and are about to drive 6 hours?  Snow!  We were all packed and ready to get an early start to Washington, DC to spend it with my youngest brother, his wife and her family, and decided, weee’lllll just wait for the guy that’s going to fix the heat to get finished.  And while he may have secretly agreed that we’re desert wimps, it turns out one of the pumps had gone out.  He replaced it, and we’ve been cozy ever since.

We did finally get on the road to DC, and had a great time with Jared, Meredith, Brad, Judi, Travis and Marissa.  Cousins Wiley and Tesla were especially excited to get to spend time together (that’s our story and we’re sticking to it anyway).  We had a fantastic meal on Thursday, then Meredith cheated at Apples to Apples (had to get that in there), and then we visited Arlington Cemetery on Friday.

It was great again to see them, and we may spend some time up there over the Christmas break while Gabriela is here with us.  We had been thinking of heading down to Florida, but our relations in Florida are heading to Arizona.  Well, fine!  We’ll just . . . go north . . . in the winter.  Like confused birds.

I hope everyone had a great holiday, and is looking forward to Christmas.  I know a couple of children who should be (good thing they don’t read, haha!).

This entry was posted in Uncategorized. Bookmark the permalink.