So I’ve been contemplative of late, and figured I’d just share that with everyone.  This won’t be a post full of the usual good humor, but as a wise man once said, “Better out than in.” (Okay, maybe some humor, 10 points to the first to identify that wise man).

I’ve learned to beware of extreme feelings.  The things that you feel most adamantly about are the things that are most likely to confront you in unexpected ways.  It’s one of the reasons that I try not to judge people.  Because it does come back to haunt you.  And sometimes you don’t even realize it.

When I was 13, my mother hooked her car up to a recently purchased truck, and with her husband, drove away from the people she loved the most.  She moved half way across the country, abandoning us to a life that at the time, no one could have imagined (except possibly her, having been on the receiving end of what we were about to face).  I’ve spent a large portion of my life being upset with her about that.  Even after she passed, I’ve had a hard time dealing with those feelings.  In fact, it’s one of the reasons I’ve felt so adamant about not having kids, as I’m afraid there just may be a genetic predisposition to abandonment.  Her mother abandoned her in a way, bringing an alcoholic into their lives and allowing him to wreak havoc.  My mother physically walked away from us, and I don’t know if you could say my father emotionally abandoned us, because that would imply he was emotionally there at some point, which I have a hard time featuring.  But I’m terrified that I would have the capacity to cause the same damage to someone that was inflicted on me.

***Disclaimer*** To be fair, there were never kids more deserving of being abandoned by someone than we were, at least by our mother.  We were beastly, beastly children, who did everything in our power to make her miserable.  All she ever wanted was for us to get along with each other and obey her, and it was something that we didn’t do until she walked away from us.  ***End Disclaimer***

I was thinking the other day about how you turn into your parents as you get older, and it hit me.  3 weeks ago, we hooked up the car to a newly purchased vehicle, and with my husband, drove away from the people that we love the most.  I moved all the way across the country, knowing that I’d miss birthday parties, and football games, and holidays, and those unexpected texts to ‘come meet us for sushi.’  And that one day my family may feel like I did, that they’d been abandoned.

So now I wonder if age really brings wisdom, or if it’s shame that brings wisdom.  My mother didn’t leave for exactly the same reasons as I did, but I believe we probably shared some motivations.  To make a better life, to grow yourself as a person, and to give a relationship that started later in life the chance to feel like one that started early.  And one thing that we didn’t share, she was totally used up.  She’d spent her entire life to that point fighting, and didn’t have anything left. And as much as it hurt me to leave, it had to have hurt her infinitely more, even if as a selfish child I couldn’t acknowledge her feelings, only my own.  And I’m ashamed that I resented her so heartily for it, never even attempting to understand.  Especially as one day I may find myself looking at the same accusatory expression and may be unable to make my choices understood.

That’s what’s been on my mind, as we approach what would have been her 59th birthday.  But the musings started because we have a pack of playful little squirrels that have been foraging for acorns in our front yard over the last week.  It’s amazing how much joy you can get from watching squirrels, and it made me think of my mom.  Those years that she lived in Oklahoma, she so wanted squirrels in her yard, but her dachshund would chase them away. 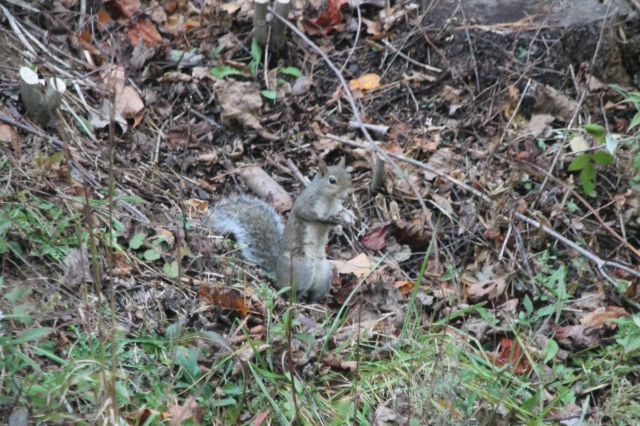 Jackpot! I found one!

Stashing this for winter!

At this point, you’re probably feeling a little fished in, and I promise to return to the normal joviality soon (we have a possible excursion to the Biltmore House on the horizon, I’m sure there will be lots to share).  But I have a platform (however large that may be Steve), and there’s just no telling how I’ll use it. . . . . . .

This entry was posted in Uncategorized. Bookmark the permalink.